Hello, and welcome to the first mini-lesson on The 40 Rules of English, where we break down every beginner rule you need to know in English and ESL. We’re starting with a pretty hefty topic, so sit tight as we go through an absolute favorite subject of ours: grammar rules!

As we explained in our master post, grammar is so tricky for beginning students because there is so much to learn. Our ten rules for grammar, however, will get you on track to spelling like an English native in no time at all. Just remember our mantra: confidence through practice. We want you to not only master the content at hand, but feel confident when you do! Practice a little every day, and watch your confidence soar! If you want to get straight to the deck and put our grammar spelling rules into practice, check them out here.

Without further ado, let’s get started with our very first rule! 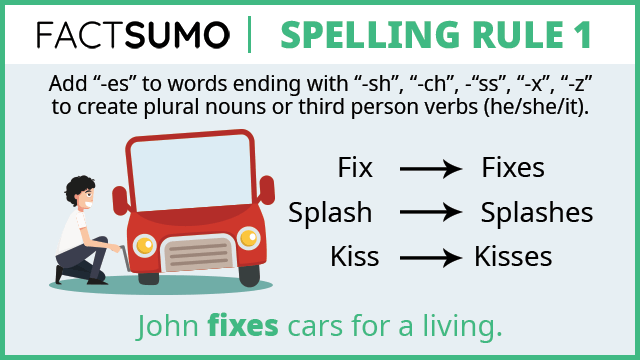 Can you think of some nouns and verbs that end in the above letters? Well, they follow a pretty cool rule to make them plural or third-person verbs respectively. Just add -es! Take this sentence as an example: Jake fixes sandwiches for his bosses. In this sentence, the endings of the root plurals and verb are -x, -ch, and -ss.

Our second rule is an example of “when all else fails”. By that we mean, if a noun or verb doesn’t end in any of the letters from the first rule, just add an -s to make it a plural or third person verb. Of course, this rule has many exceptions, but it’s probably the most common way to pluralize nouns. Here’s an example sentence: Jenny gets treats so her dogs can eat them. Notice how none of the roots in these verbs and nouns ending in -s have the above letters in their base (get, treat, dog).

Here is our final beginner rule for making nouns plural and verbs third person. Before we explain, remember that every rule has exceptions! After the first two rules, this one is fairly easy. When a base word ends in [any consonant] + -y, your new ending becomes -ies. Yep, that’s all there is to it! Here’s a handy example sentence: Sam tries to work with families and babies. Take note that the base words (try, family, baby) don’t simply add -s, but drop the -y before adding -ies!

OK, let’s talk about gerunds and present participles before you start panicking. They certainly sound like scary words, but in reality, they’re easy concepts. Both are formed from verbs ending in -ing. Gerunds act as nouns in a sentence, while present participles act as verbs and adjectives. Here is a quick example before we talk about the above rule: “I am singing to my friends.” The wordsinging is a present participle, because it describes an action using -ing (in the present tense). Now take a look at this sentence: “I love singing.” Here, singing is a gerund, because it describes the act of singing as a noun.

Now that we clarified that, let’s talk about the above rule. When a verb ends in two consonants, all you have to do to make it a gerund or pp (present participle) is add -ing. Take a look at the above example. The root word is “sing”, which ends in the consonants “n” and “g”. So, all we need to do is add -ing to create the gerund or pp, “singing”.

Short vowels, on the other hand, will make a different sound. Think of the word “fat” or “tub”. Now let’s look at the fifth rule. If the verb in question ends in short vowel + consonant, double the consonant before adding -ing to make it a gerund or pp. Consider the short vowel word “sit”. This short vowel word ends in a consonant, so how do we make it a pp or gerund? Double the last letter, and add -ing! So, “sit” becomes “sitting”.

This is a straightforward rule to follow for the few verbs that end in -ie. To make them a pp or a gerund, just change that ending to a -y and add -ing. Check out this sentence: “I am dying to tell you how good I am at lying”. The root word of the pp “dying” is “die”. Since it ends in -ie, that ending was changed to a -y + -ing, resulting in the word “dying”. The same goes for the root word “lie”.

Our seventh rule creates a gerund and pp as well, when root verbs end in a silent -e. A silent -e is found on the ends of words that don’t pronounce the -e in the word. There are many examples, so here’s one to help you out. Consider the silent -e word “wave”. How would you turn this into a gerund? Drop the -e, and add -ing! “Wave” becomes “Waving”.

The final three grammar rules concern making adjectives using the letter “y”. When some nouns end in two consonants, you can add -y to turn them into adjectives. We’re putting emphasis on some, because this rule has quite a few exceptions. Nonetheless, it’s an important rule! Let’s look at a silly sentence that illustrates our rule: “The itch is itchy.” Well, of course itches are itchy. Regardless, this is perfect for our rule because it shows a noun which ends in two consonants (“itch”), turning into an adjective (“itchy”). All you have to do in this case is add -y.

We’ve already dealt with short vowels + consonants, so this is nothing new. To turn these words into adjectives, just double the consonant and add -y! We’re going to use another silly sentence to make our point: “Mud is muddy.” Yes, yes, we know. Mud is defined by its muddiness. This just shows that if a noun ends in a short vowel (“u”, in this case) + a consonant (“d”), then double that last letter and add -y to turn it into an adjective!

There you have it. Our first mini-lesson on the top 40 English Spelling Rules is in the books! Who needs fanfare when you have awesome English knowledge at your fingertips? Now, go out into the world and use those English writing skills wherever you can.

Want to sharpen those skills and prove to yourself you have what it takes to master the first steps of English spelling? We’re proud of you (and we’re here to help)! That means you’re ready for mini-lesson two: prefixes. Don’t worry, it won’t be as heavy as today’s topic. But we promise it’ll be just as fun! If you aren’t quite ready, that’s OK! Use this lesson as a guide, and keep practicing every day. Practice builds the confidence you need to tackle even the most difficult of concepts. Check out our paths, decks, and other lessons today! See you next time.